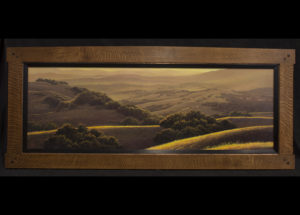 the hills I grew up exploring in California.  It is 65 inches wide.  It is also the most

“tonal” of my recent paintings of the California coast range.  I opted for this approach

because the light on these hills are so variable creating many moods.  One such mood

fits perfectly into and aesthetic I love, that is of the early California painters most influenced

by a Danish artist who moved to San Francisco after study in Denmark and Paris and work as an instructor in Chicago.  His name was Emil Carlsen.  Carlsen

brought with him a tonal approach that deeply influenced his students including Guy Rose, Percy Gray and

Arthur Matthews, among others.  This more subtle approach, in turn, fit well into the Arts and Crafts style of the

era.  Carlsen did not stay long in California as he was largely ahead of his time in the west which, despite a thriving art community, lacked the sophistication to fully grasp his refined sense of design

and subtle sensibilities.  But he left his mark on his students and peers, a mark that has lasted over a century

and, through Matthews in particular, influenced this painting – and my entire approach to art generally.